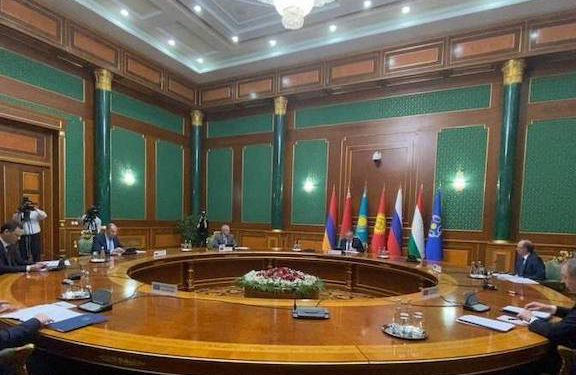 The incursion by Azerbaijan into Armenia’s sovereign territory is a direct threat to the security of the region, as well as to CSTO members states, said Armenia’s Foreign Minister Ara Aivazyan on Wednesday while addressing the Collective Security Treaty Organization’s council of foreign ministers underway in Dushanbe, Tajikstan.

After Azerbaijani forces breached Armenia’s border and advanced several kilometers into Armenia, where they have been holding their position pending negotiations, Armenia officially appealed to the CSTO for help in defending one of its member states.

Aivazyan highlighted the security complication created by Azerbaijan’s actions, warning of the security implications for not just the Caucasus, but the entire region, saying a security response by the CSTO has become quite relevant.

While neither the CSTO or Russia, which received a similar call for help from Yerevan, this was the first time since Azerbaijan’s invasion attempts that Yerevan was able to address the situation with leaders of CSTO members states in person.

In discussing the Karabakh conflict, Aivazyan said the use of force by Azerbaijan can in no way lead to a resolution of the conflict, adding that the conflict must be solved exclusively through diplomacy under the auspices of the OSCE Minsk Group Co-Chairmanship and based on the joint and comprehensive implementation of the principles developed by that mediation mission.

Ahead of the foreign ministers’ council, the CSTO’s Secretary-General Stanislav Zas said that the organization continues to monitor the developments in Armenia’s Syunik Province and did not respond to Armenia’s plea for help.

Zas welcomed negotiations that have been ongoing between the sides, under Russia’s mediation, as well as the reaching of the agreement on withdrawing some of the units.

On Wednesday, the Azerbaijani side did not show up to scheduled meetings aimed achieving a negotiated settlement to the border tensions.

“We see prospects for establishing lasting peace. There are no shootings any more, but the situation remains tense,’’ Zas acknowledged.

In discussing Armenia’s appeal to the CSTO, Acting Prime Minister Nikol Pashinyan told a National Security Council session on Wednesday that the CSTO possesses the security tools, despite its slow response to Yerevan’s request.

“We will also continue our diplomatic efforts to provide the international community complete information and increasing international pressure on Azerbaijan,” said Pashinyan, adding that Yerevan continues its talks with Armenia’s “strategic ally,” Russia.