Aliyev Says He Will Not Attend Planned Meeting With Pashinyan 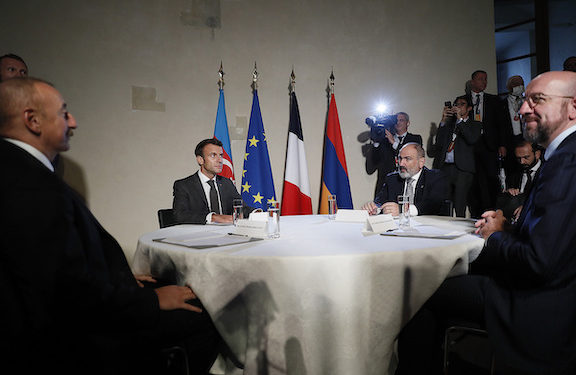 He said that France can no longer mediate Armenian-Azerbaijani negotiations because of Macron’s recent pro-Armenian comments and “anti-Azerbaijani” resolutions adopted by French lawmakers.

Aliyev and Pashinyan were scheduled to meet in Brussels on December 7 for further talks hosted by the European Union’s top official, Charles Michel.

“Yesterday [the Azerbaijani presidential aide] Hikmet Hajiyev informed me that he has been contacted by the office of Charles Michel and told that Armenian Prime Minister Nikol Pashinyan is willing to meet only with the participation of French President Macron,” Aliyev told an international conference in Baku. “This means that the meeting will not take place.”

“We will discuss alternatives,” he said. “We will see who will assume the role of a mediator and on what platform.”

Aliyev claimed that Pashinyan set that condition in order to drag out the negotiating process and prevent the signing of an Armenian-Azerbaijani peace treaty sought by Baku.

The Armenian Foreign Ministry confirmed that Yerevan wants Macron to take part in the Brussels summit. It argued that Aliyev and Pashinyan met in Prague on October 6 in the presence of both Michel and Macron.

“It’s logical that the format of the meeting and the composition of its participants be the same,” the ministry spokesman, Vahan Hunanian, added in written comments.

Accordingly, Hunanian denied that Yerevan is torpedoing the peace process.

The most recent Armenian-Azerbaijani summit was hosted by Russian President Vladimir Putin in Sochi on October 31.

In a joint statement with Putin issued there, Aliyev and Pashinyan pledged to “actively” work on the bilateral peace treaty and “refrain from the use of force or the threat of its use.” But they traded fresh accusations in the following weeks. In particular, Pashinyan charged on November 10 that Baku is planning a “genocide” of Nagorno-Karabakh’s ethnic Armenian population.

Tensions along the current “line of contact” in and around Karabakh have risen markedly over the past week. The Azerbaijani military and Karabakh Armenian forces have accused each other of violating the ceasefire on a daily basis.

In recent days, the authorities in Stepanakert have also accused Azerbaijani troops of repeatedly firing at Karabakh Armenian farmers cultivating land in their communities. They have reported those incidents to Russian peacekeeping forces stationed in Karabakh.

On Thursday, the Azerbaijani Foreign Ministry claimed that Armenia shipped weapons to Karabakh through the Lachin corridor, also protected by the Russian forces, after the 2020 war. Azerbaijan’s State Security Service said, for its part, that the Armenian side is also planning “military provocations.”

A senior Armenian official, Edmon Marukyan, dismissed the allegations on Friday. Marukyan told RFE/RL’s Armenian Service that Baku is preparing the ground for a possible seizure of the Lachin corridor.