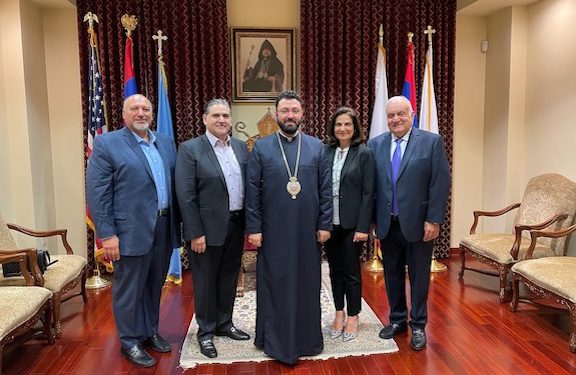 A delegation of the Armenian Revolutionary Federation Western U.S. Central Committee visited Western Prelate Bishop Torkom Donoyan on Friday at the Prelacy where they discussed issues related to relief efforts for Armenians in Lebanon, as well as the current developments in Armenia and Artsakh.

The Prelate briefed the ARF leaders about his recent trip to Armenia, where he became acquainted with the needs of Armenians, following last year’s devastating 44-Day War in Artsakh. As His Holiness Aram I, Catholicos of the Great House of Cilicia has declared 2021 the “Year of Artsakh,” the Prelate and the Prelacy have embarked on campaign to assist families affected by the war. The ARF Western U.S. Central Committee, in it turn, through a partnership with the Armenian Cultural Foundation provided assistance to the families of fallen and wounded soldiers when members visited Armenian in April and personally delivered the financial aid packages.

Earlier this week, the Prelate announced on social media that churches, parishioners and community leaders had heeded his call earlier this month to advance Catholicos Aram I’s other plea for assistance to the Armenians in Lebanon, who direly are lacking basic provisions due to the country’s ongoing economic crisis. He announced that in a short time $300,000 has been collected for this effort.

The ARF Central Committee members welcomed the Prelate’s initiative and reported that the organization is also engaged in advancing assistance efforts to our brethren in Lebanon. They informed Bishop Donoyan that in addition to several local events, the Central Committee is working with the ACF on a fundraising event scheduled for Thursday, September 16 at the courtyard of the St. Gregory the Illuminator Catholic Church, the proceeds from which will go directly to the relief effort for Lebanon Armenians.