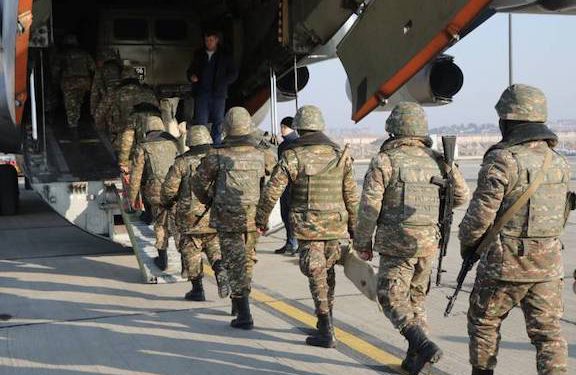 Armenia has dispatched 100 peacekeepers to Kazakhstan as part of a mission from the Collective Security Treaty Organization, which responded to Kazakh president’s request for CSTO assistance to quell the civil unrest that has taken the Central Asian country by storm this week.

Armenia, which currently holds the presidency of the Russia-led CSTO, appealed to the group during last year’s Artsakh War, and again in May after Azerbaijani forces breached its sovereign border in Gegharkunik and Syunik provinces. The security organization did not send assistance to Armenia and called both Yerevan and Baku to resolve issues through diplomatic avenues.

“During the mission the Armenian peacekeeping unit will carry out functions that exclusively protect buildings and infrastructures of strategic significance,” Armenia’s Defense Ministry said Friday in a statement.

“Three Il-76 planes have already departed from the Zvartnots airport to Kazakhstan,” explained Russia’s defense ministry, referring to the type of aircraft being used to transport the troops.

Armenia’s decision to respond so swiftly to Kazakhstan’s request has been criticized by opposition forces and civic groups, which called the move “short-sighted and irresponsible.”

Demonstrations swept across Kazakhstan in protest to a government price hike of natural gas. Angry protesters blocked government buildings and the airport in the country’s largest city, Almaty, and reportedly took over a state-run television station. Several dozen security officers have been killed and hundreds have been injured in clashes between protesters and police.

Kazakhstan’s president, Kassym-Jomart Tokayev, issued a verbal appeal to the CSTO, of which it is a member. The organization and Moscow quickly responded to Tokayev’s non-written request with Russia dispatching its own troops on Thursday. The move is largely seen as Moscow extending its reach of influence to the largest Central Asian republic amid Western pressure on Russia regarding what is being seen as a plan to invade Ukraine.

Tokayev, who labeled the protesters “bandits” and “terrorists,” on Friday issued a “shoot to kill” order to its security personnel. He also personally thanked Prime Minister Nikol Pashinyan on Friday for Armenia’s response to the crisis.

“As you know, pursuant to the main clauses of the CSTO charter documents, Kazakhstan applied to the leaders of the member states requesting the deployment of a joint peacekeeping continent to support in establishing constitutional order,” Tokayev said in a statement.

“This contingent arrived to our country for a brief period of time for carrying out protection and logistics. I’d like to express my sincere gratitude to the Prime Minister of Armenia – who is now presiding in the CSTO, as well as the presidents of Belarus, Kyrgyzstan and Tajikistan. I am relaying special thanks to the President of Russia Vladimir Putin. He reacted to my request very swiftly, and most importantly warmly and as a friend,” Tokayev explained in his message.

Pashinyan held talks with Russian President Vladimir Putin, the Belarus President Alexander Lukashenko and the CSTO Secretary-General Stansilav Zas, who briefed Armenia’s prime minister on the ongoing efforts of the organization in Kazakhstan.

Armenia’s Foreign Ministry spokesperson Vahan Hunanyan said the Armenia’s peacekeepers will not be evacuating Armenian citizens living in Kazakhstan. Their main task, he said, will be guard strategic buildings located where protests are being held. This raised the question whether the Armenian forces will have to follow the Kazakh leader’s “shoot to kill” order.

Armenia’s National Security chief Armen Grigoryan rationalized Yerevan’s incongruent response to the Kazakh crisis by saying that Armenia attaches importance to the responsibility it has assumed as part of the CSTO Chairmanship.

“One of the most important questions is why didn’t the Republic of Armenia, when it had asked for help in time, receive such help, while today Armenia is reacting when it is receiving such request,” said Grigoryan during an interview with Armenia’s Public Television on Friday. “First of all I’d like to say that [Armenia’s] posturing stems from its responsibility here. We attach great importance to the responsibility that we’ve assumed.”

“I’d like to note that the Prime Minister of Armenia, upon receiving reports on the developments in Kazakhstan and the request of Kazakhstan’s President Tokayev, launched consultations with all other CSTO member-state leaders so that the CSTO provides assistance,” added Grigoryan in delineating the steps that led to the decision to send peacekeepers to Kazakhstan.

“At that time, there were no revolutionary processes there, there were terrorist acts happening. You’ve seen videos online showing armed people outside. And the decision was made within the framework of the logic of ensuring stability and security,” Grigoryan rationalized.

On Thursday, ahead of Yerevan’s announcement of troop dispatch to Kazakhstan, the Helsinki Citizens’ Assembly published a statement signed by 20 civic and non-governmental organizations, calling Armenia’s involvement in the Kazakhstan crisis “short-sighted and irresponsible.”

“In 2018, the people of Armenia rejected dictatorship and chose the path of strengthening democracy. It is possible that the Armenian Government is being used by a club of authoritarian countries due to the state’s vulnerable security situation. Nonetheless, this will in no way justify their short-sighted behavior and will call into question their intention to be in the family of democratic states,” said the groups in the statement.

“Interfering with Kazakhstan’s internal affairs by participating in actions against that country’s resident’s justified anger and possible violations of human rights will cause significant irreversible damage to Armenia’s international reputation, with the relevant consequences ensuing. On the other hand, it will generate an extremely dangerous situation for thousands of Armenians residing in Kazakhstan and neighboring countries in any scenario of development,” explained the angry groups.

“A country’s people are to choose their authorities themselves and no other country has a legitimate right to get involved in their inter-political life. Today, Armenia’s Armed Forces have their mission in protecting our country’s borders and should not serve interests of foreign dictators, who were indifferent to Armenia’s security threats and welcomed ethnic cleansing in Artsakh,” added the statement.

Karekin II Speaks Out Against Abuse of Power in Armenia