Blinken Broaches Release of POWs in Talk with Aliyev 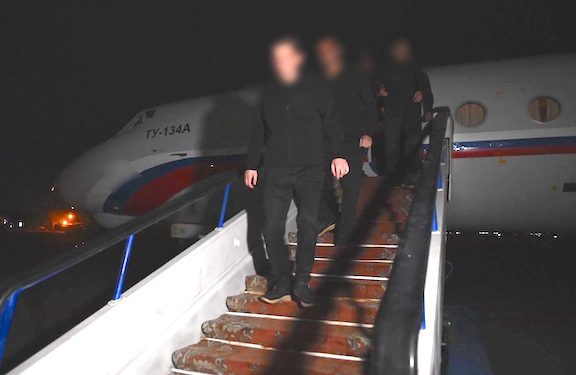 Five POWs being held captive in Azerbaijan return to Armenia on Oct. 19, 2021

Azerbaijan faltering on the issue of releasing Armenian prisoners of war was one of the topics discussed by Secretary of State Antony Blinken during his telephone conversation with President Ilham Alliyev on Wednesday.

According to a State Department read out of the call, the release of POWs still remaining in Azerbaijan was discussed alongside other matters including the pace of progress on the so-called peace talks between Armenia and Azerbaijan.

“I spoke with Azerbaijani president Ilham Aliyev today about how the United States can continue to support the positive dynamics of the recent peace talks between Azerbaijan and Armenia,” Blinken wrote on Twitter after his call with Aliyev.

“The parties discussed the forthcoming concrete steps aimed at establishing peace in the South Caucasus, including the delimitation and demarcation of borders, the opening of transport and communication routes, and the release of remaining Armenian prisoners of war,” the State Department said in its read out of the call.

“Secretary of State Blinken reaffirmed the United States’ readiness to assist by cooperating on a bilateral basis, as well as with like-minded partners, including in the status of the OSCE Minsk Group Co-Chair, to assist the countries in finding comprehensive and lasting peace,” added the State Department statement.

While visiting the Netherlands, Prime Minister Nikol Pashinyan touched on the issue of POWs and the need for Baku to repatriate them to Armenia, saying that Azerbaijani is using the Armenian captives as a bargaining chip to advance its interests in regional developments.

Azerbaijan is trying to make the issue of the return of Armenian captives a subject of trade, Prime Minister of Armenia Nikol Pashinyan said at the Netherlands Institute of International Relations, Clingendael, in response to the question of the meeting participants.

“Unfortunately, despite the November 9, 2020 statement and calls by numerous international organizations, our citizens who were captured during the 44-day war have not been returned, which cannot be understood. This is a practice of using people for political purposes and making them a bargaining chip, which is condemnable,” Pashinyan said in remarks he delivered at the Netherlands Institute of International Relation in Clingendael.

He explained that once discussions on the return of POWs started, Azerbaijan said that they would be released in return for minefield maps of Artsakh. Pashinyan said that Baku was willing to trade POWs for every map Armenian provided. Thus, he said, Yerevan handed over all the maps in its possession in hopes of addressing one humanitarian issue with another.

Pashinyan claimed that Yerevan’s decision to hand over the maps was done as a demonstration of its “dedication to the peace agenda.”

“Until today, at least 38 of our captives are being held in Azerbaijan,” said Pashinyan, emphasizing that during all discussions, Baku attempts to bargain the lives of POWs with other matters that it wants to achieve during the current processes.

“By the way,” Pashinyan added, “the last time it [the barter] was in the presence of the President of the European Council that the Azerbaijani leader promised that he will release another group of captives, but this has not happened so far. I think that it’s impossible to talk about peace by ignoring the humanitarian side of the issue.”

He emphasized the need for the international community to be aware of the current situation and called on them to continue urging Azerbaijan not to make people a subject of political bargaining.

“The war has brought tragedy to many, but I don’t think that the approach of constantly pouring salt on that open wound fits into the 21st century value system,” said Nikol Pashinyan.

Blinken Broaches Release of POWs in Talk with Aliyev