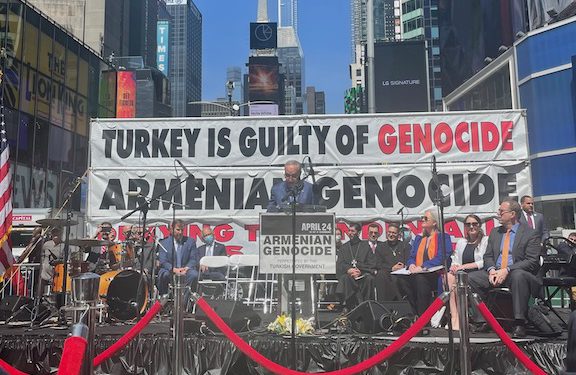 For the first time in two years, and since President Joe Biden’s landmark Armenian Genocide affirmation, scores of resilient and spirited Armenian Americans gathered in Times Square, New York, to commemorate the 107th anniversary of the Armenian Genocide, in a momentous event organized by the Knights and Daughters of Vartan on Sunday, April 24.

Key elected officials, who for decades fought for U.S. recognition of the first genocide of the 20th century with determination and moral fortitude, once again graced the podium, and remarked on the symbolic victory of Armenian Genocide affirmation by the U.S.

“I am so proud that we put legislation on the floor and finally got America to recognize the genocide against the Armenian people,” said Senator and Senate Majority Leader Chuck Schumer (D-NY).

“For too long throughout history, nations of the world turned a blind eye to one of the most shameful episodes of human history, and for years I called on both parties to lead the world by example and to define the atrocity for what it was, a genocide, and finally those tireless efforts culminated last year in a huge milestone when President Biden recognized the genocide,” added Senator Schumer.

Schumer commended the “hardworking and successful” Armenian American community for their persistence and hard work, and highlighted their efforts to never forget their ancestors who died in peril.

Citing his “relief and gratification” that the anniversary of the Armenian Genocide can be commemorated with the knowledge that the U.S. has finally recognized the ‘Medz Yeghern,’ Schumer said it’s the duty of humanity to recognize the victims and the survivors, because “a genocide not properly remembered can lead to another.”

Schumer noted that although the Armenian Genocide was the first genocide of the 20th century, it was not the last, and that all genocides are “a stain on humanity.”

An equally tireless and longtime advocate for Armenian Genocide recognition, Senator Bob Menendez (D-NJ), who serves as Chair of the Senate Foreign Relations Committee, stated that “after more than a century of side-stepping, an American president called the Ottoman Empire’s systematic drive to eliminate the American people by its true name. President Biden called it Genocide and that is what history records it as.”

Menendez praised the Armenian American diaspora, organizations, churches, civic groups, lobby legislators and individuals who year after year “never gave up on the truth” and attended the Times Square Commemorations to “remind the world of this crime.”

“The [Ottomans] tried to suppress the truth,” said Menendez. “They sent Armenians to the Syrian desert for elimination, denying them food and water, starving them until they were skin and bones, and threatening to arrest anyone who would supply evidence to foreign embassies, and as they piled bodies on the edge of roadways, they prohibited anyone from taking photos.”

Menendez noted that to this day Turkey refuses to acknowledge the truth of the Armenian Genocide, and has spent millions of dollars on public relations and political lobbyists to deny the past, while prosecuting, jailing, and even assassinating writers, historians, and journalists who speak the truth.

“Turkey tries to cover up historical facts undermining the fundamental fact of the freedom of speech,” said Menendez, who stated that the only way to overcome the denial is to continue to stand up together in solidarity. “This is a cause I’ve cared about deeply and it’s a cause that’s close to my heart, and I’m proud that even as American leaders and allies stayed silent on this issue, I did not.”

Menendez blocked U.S. Ambassador nominees from their positions because of their refusal to refer to the Armenian Genocide as a genocide, he introduced resolutions recognizing the Armenian Genocide since he came to the Senate in 2006, and he urged both Democrats and Republicans to acknowledge the truth, despite Turkey’s threats to close military bases.

“I went to the floor of the U.S. Senate time after time and fought my colleagues who would deny the Armenian Genocide and not agree to pass the resolution until I shamed them into admitting it,” said Menendez. “That was a great victory, but our fight is not over. When Turkey continues its campaign of denials and threats, when Azerbaijan launches a war against Artsakh with Turkey’s full backing, resulting in appalling human rights abuses, these threats to the Armenian people cannot go unanswered.”

As Chair of the Foreign Relations Committee, Menendez vowed to “continue to press this government to make sure they end military assistance to Azerbaijan because we cannot have another genocide.”

“We must fight for the truth even if dictators prefer silence,” said Menendez in closing. “We must hold accountable those committing genocide today even if it takes a lifetime, and if we back up our values with actions and have the courage to stand up for our principles, I believe we will triumph over tyranny.”

Congressman Thomas Suozzi (D-NY) drew a parallel between the human rights violations occurring in Ukraine and how “attention must also be paid to what is going on in Armenia right now as we speak.”

“We know from history that intentionally ignoring crimes of humanity only ensures that atrocities like those will be repeated,” he said, highlighting that the Armenian Genocide and the deaths of 1.5 million men, women, and children, have been acknowledged and “universally condemned.”

New York State Senator John Liu said that the “truth never disappears,” even after a century, and finally the President of the U.S. “called what happened to 1.5 million people beginning in 1915 what it is – a genocide.”

“Until people recognize what happened, we are doomed to repeat the same mistakes again,” said Liu. “Recognition and apologies have to take place so the world makes amends the right way.”

Grand Commander of the Knights of Vartan, Steven Adams, reflected on the rich history of the Armenians and their perseverance in overcoming challenges, including the Battle of Vartanantz, which was a fight for their Christian faith.

“We still remember and commemorate this Battle, which took place 1,571 years ago, so to the world and to the Turkish government, let me assure you that we aren’t going away and we will never forget,” he said.

Adams referred to the “stain of genocide” and the 1.5 million Armenians who had lived in their historical homeland for millennia, until they became martyrs in the genocide. He expressed that “history needs to be confronted, no matter how painful or distasteful it may seem.”

“The wound of denial will never heal on its own,” said Adams. “The historic lands of the Armenians are physically there and we can see them on the map, but the soul of that land is gone.”

Adams urged everyone to continue to speak the truth, noting that “our freedom requires us to proclaim that genocide has been committed and the world will not tolerate it as we ask for justice to those who perished and truth to those who deny.”

In his closing remarks and prayer, Archbishop Anoushavan Tanielian, Prelate of the Eastern Prelacy of the Armenian Apostolic Church of America, expressed that the Armenian Genocide is the “root of evil acts” and that even after 107 years, the “perpetrators deny it with arrogance.” Archbishop Tanielian highlighted the 44-day Artsakh War in the Fall of 2020 and the ongoing destruction of Armenian churches and cultural heritage sites.

“We stand with the victims of injustice around the world and we will stand with them until justice prevails,” Archbishop Tanielian concluded.

The opening prayer was made by Rev. Tavit Karamyan, representing Very Rev. Daniel Findikyan, Primate of the Eastern Diocese of the Armenian Church of America. Other clergy in attendance included representatives of the Roman Catholic Armenian Eparchy of America and Canada, as well as the Armenian Evangelical Church.

The Astghikner Vocal Ensemble of Brooklyn Armenian School sang the Armenian and American anthems and God Bless America, under the leadership of Maria Sahakyan.

The Knights and Daughters of Vartan have sponsored the Times Square Armenian Genocide Commemoration since 1985, along with the support of a multitude of Armenian American community organizations. This year the event was co-chaired by Tigran Sahakyan and Ari Minnetyan, under the guidance of Chairman Emeritus Hirant Gulian.