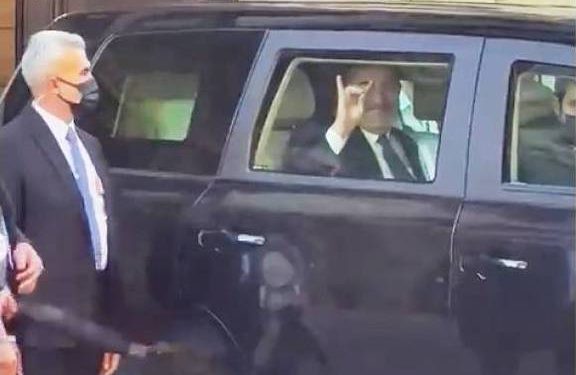 After Turkish Foreign Minister Mevlut Cavusoglu taunted Armenian protesters by flashing the ultra-nationalist Grey Wolves sign while on an official visit to Montevideo, the president and foreign minister of Uruguay condemned the behavior of Turkey’s top diplomat.

A group of Armenians protesting Cavusoglu’s visit were gathered in front of the newly-inaugurated Turkish Embassy in Uruguay on Saturday.

Uruguay was the first country to recognize the Armenian Genocide in June, 1965.

A video of the incident posted on social media shows Cavusoglu leaving the building and entering a vehicle, in which he was smiling and quickly flashing the Grey Wolves sign.

The Grey Wolves is a radical terrorist organization responsible for a series of terrorist attacks and other crimes committed against Armenians, Kurds and other minorities and is allegedly connected to the assassination attempt on Pope John Paul II.

Turkish Foreign Minister Cavusoglu salutes the protestors marching for the Armenian genocide anniversary in Uruguay with the grey wolf sign.

The controversial gesture was banned in Austria in 2019. In Germany, the Christian Democratic Union of Germany and the Left party also proposed to ban the use of the symbol, describing it as fascist.

Uruguay’s President Luis Lacalle Pou described as “regrettable” the gesture made by Cavusoglu.

Speaking to the press, Lacalle Pou assured that the attitude of the Turkish foreign minister, should be “strongly criticized (…), the community is hurt, and rightly so,” he said according to a report published by Deutsche Welle.

Cavusoglu made the gesture of this far-right movement to a group of Armenian demonstrators who were waiting for him on April 23 at the inauguration of the Turkish Embassy in Uruguay, a country where he is visiting to start negotiations with a view to signing a Free Trade Agreement.

In this sense, Lacalle Pou distanced himself from the policy of the Government of the Turkish president, Recep Tayyip Erdogan: “Advancing in commercial matters does not mean” that Montevideo agrees “with the internal or external policy” of the other party.

The Uruguayan foreign minister, Francisco Bustillo, joined the condemnation of Lacalle Pou on Sunday afternoon and called the gesture of his Turkish counterpart “inadmissible” during the 107th anniversary of the Armenian genocide.

Bustillos, who on Saturday summoned the Turkish ambassador to a meeting on April 25 to explain the event, affirmed that the Uruguayan government rejects “any invocation or offensive gesture that generates violence.”

“In cases of confrontations our country prefers reconciliation. We advocate mutual understanding, tolerance and we hope that those who visit our country, where peace and tolerance is advocated, will act in this manner. I reject and condemn any insulting conduct or gesture that implies physical or moral violence,” Bustillos said, referring to Cavusoglu’s Grey Wolves salute.

The Cavusoglu incident was also discussed on Monday during the Parliamentary Assembly of the Council of Europe, where Armenian lawmaker Vladimir Vartanyan flashed the sign to draw attention to its unacceptable use by Turkey’s foreign minister on the eve of the Armenian Genocide anniversary.

“I am showing this [sign] to you because just two days ago Mr. Mevlut Chavusoglu, the incumbent Turkish Foreign Minister has shown this to the participants of the peaceful demonstration in Uruguay demanding the recognition of the Armenian Genocide,” said Vartanyan.

“It is strange that a high level European diplomat and politician promotes such a sign. It becomes even more unacceptable when it is done by a former President of the Parliamentary Assembly, a person who here in this arena spoke about democracy, human rights and rule of law. The person whom all of us gave support and right to represent us all and disseminate ideas of the Council of Europe and protect the European values allows himself to promote such a radical symbol,” Vardanyan added.

The Armenian lawmaker said that actions such as Cavusoglu’s endanger the possible confidence building process between the two societies.

“Here I would like to once again state clearly that we in Armenia are very devoted to European values and we are continuing to do our best to normalize Turkish-Armenian relations expressing hope that our Turkish counterparts will have enough will to open the mutual border and establish normal relations with Armenia and contribute to the de-escalation and building of sustainable peace in our region,” said Vartanyan.