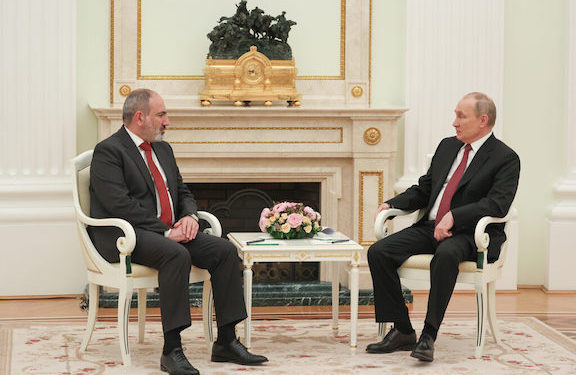 Prime Minister Nikol Pashinyan had a private meeting with President Vladimir Putin of Russia in the Kremlin on Monday, following an all-day meeting with the leaders of the Collective Security and Cooperation Treaty.

“We regularly keep in contact on all issues on the bilateral agenda and regional matters. However, there are always a lot of questions – this is obvious given the intensity of our dialogue,” Putin said at the beginning of the meeting, according to a readout provided by Pashinyan’s press office.

Putin noted that over the past year the two countries have seen a decent growth in trade with investments continuing.

“We continue to work actively together in the settlement of the Karabakh issue – already in a trilateral format, together with our partners from Azerbaijan,” Putin said.

“There are a lot of questions, I am glad to have the opportunity to meet with you both and talk about this entire complex,” Putin said.

Pashinyan signaled that issues related to regional security, including the settlement of the Karabakh conflict were on the agenda of the talks, including “the important role of the OSCE Minsk Group co-chairs.”

The Armenian prime minister also expressed hope that the discussions at the CSTO summit would help the further development of the organization.

Earlier in the day, Pashinyan had expressed his dismay that the CSTO’s commitment to Armenia had come up short after he appealed to the security group for assistance when Azerbaijan breached Armenia’s sovereign borders and advanced its forces in the Gegharkunik and Syunik provinces.

“In terms of the economy, I would like to note that after a certain decline in March, there is an intensification of bilateral economic ties. We see investment interest from Russian businesses that want to invest in Armenia. And I know that you are encouraging Russian businessmen to invest in Armenia. I want to thank you for that,” Pashinyan told Putin ahead of their meeting.