Putin and Pashinyan Meet in Moscow 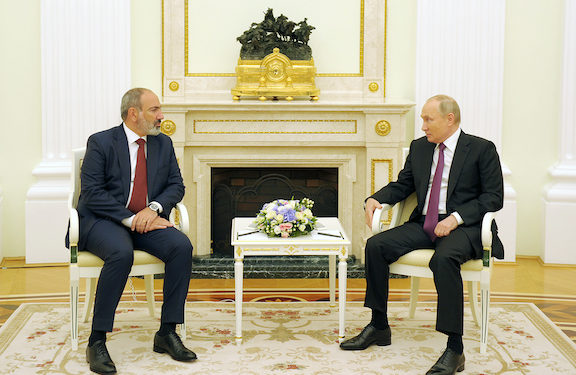 Acting Prime Minister Nikol Pashinyan met with Russian President Vladimir Putin in Moscow on Wednesday, in what was the Armenian leader’s first visit abroad after his Civil Contract party walked away with a significant lead in the June 20 snap parliamentary elections.

“Unfortunately, we have been discussing security issues a lot lately, as the situation in our region is not stable,” Pashinyan told Putin ahead of their private meeting, according to the prime minister’s press office.

While Pashinyan welcomed what he called Putin’s personal and Russia’s efforts to reach a ceasefire after last fall’s war, he did express anxiety about the instability of the region, saying, however, that the deployment of Russian peacekeeping forces in Karabakh has significantly contributed to calm there.

“The situation on the Armenia–Azerbaijan border is also not very stable. We have talked about this issue many times. I want to say that, unfortunately, here we have also had constant anxiety for the last two months,” Pashinyan said.

After thanking Putin for Russia’s mediation efforts that resulted in the release of 15 Armenian prisoners of war on Saturday, albeit with Armenia surrendering landmine maps in areas that have fallen under Azerbaijani control, Pashinyan told the Russian leader that the POW issue is not “completely resolved.”

At the beginning of their meeting, Putin, after congratulating Pashinyan, told the Armenian leader that after June 20 elections Pashinyan has a mandate to address what he called “very acute and sensitive issues” facing Armenia.

“I think that … very acute and sensitive issues requiring a solution can be solved only in case of being able to work effectively,” said Putin. “The most important thing for that is to have the people’s trust. As the election results showed, you do have it.”

“At such difficult moments in the life of a country, this is probably the most important condition for further development,” added the Russian leader.

While no official information was provided by either side on other discussion that took place during the meeting, Putin told Pashinyan that “all issues which we have discussed in detail recently and which require our solution” would be topics broached during their meeting.

Russian Troops to be Deployed in Gegharkunik