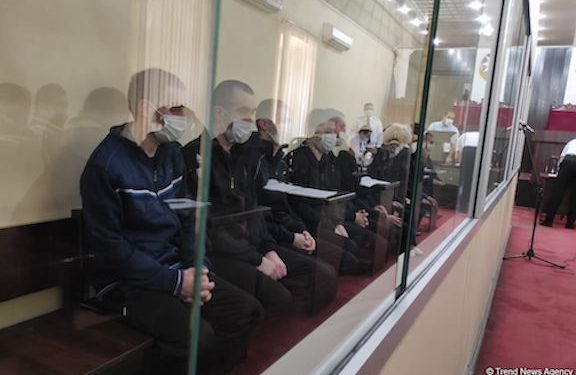 Another sham trial of Armenian prisoners of war being held captive by Azerbaijan was staged on Wednesday in a Baku court, while a video has surfaced in which Azerbaijani President Ilham Aliyev admitted that Baku was holding Armenians captive to advance its political interests.

The trial of 14 Armenian POWs kicked off in an Azerbaijani court with prosecutors alleging that the defendants “illegally crossed the state border of Azerbaijan on November 26-27, 2020 as an organized group, took up the combat positions in the forest and other areas in the northwestern part of the Hadrut in the Khojavend district.”

Trend.az reported that another three Armenians, Andranik Mikaelyan, Setrak Soghomonyan, Rafik Karapetyan, are being investigated for the same “crime.”

The trial comes days after an Azerbaijani court sentenced Lebanese-Armenian Vicken Euljekian to 20 years in prison for alleged terrorism.

On Saturday, through the mediation of the United States, the European Union and Georgia, Azerbaijan released 15 POWs, in exchange for Armenia handing over maps of landmines located in Aghdam, which was surrendered to Azerbaijan after the November 9 agreement.

Armenia’s Human Rights Defender Arman Tatoyan on Wednesday revealed that during a conversation with President Recep Tayyip Erdogan of Turkey, Aliyev admitted to holding a number of Armenians captive for political purposes.

Tatoyan said that conversation between Aliyev and Erdogan, which took place when the Turkish leader was visiting occupied Shushi, is irrefutable evidence that the Azerbaijani authorities are:

“This discussion between the Presidents of Turkey and Azerbaijan proves that Armenian captives are being illegally held in Azerbaijan in exchange for minefield maps,” said Tatoyan who said the translated version of the above video will be dispatched to relevant United Nations bodies, the OSCE, Council of Europe and other international structures.