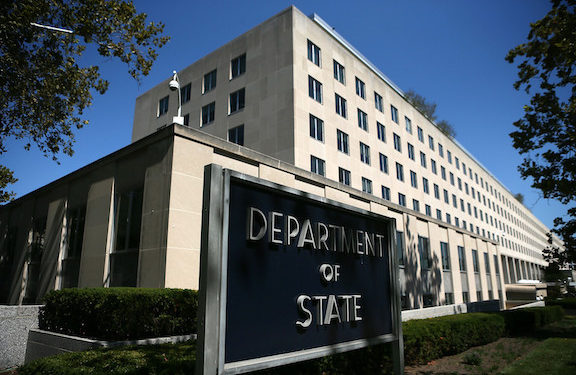 YEREVAN (Azatutyun.am)—The U.S. State Department has advised Americans to avoid traveling to Armenia or Azerbaijan and to “exercise caution on roads” close to the Armenian-Azerbaijani border.

The department described the coronavirus pandemic as the main reason for the separate travel advisories released by it on Tuesday. It said the U.S. Centers for Disease Control has issued travel health notices indicating a “very high level of COVID-19” in both South Caucasus countries.

The daily number of officially confirmed coronavirus cases in Armenia has fallen significantly for the last three weeks. The Armenian Ministry of Health reported on Wednesday morning that 229 more people have tested positive for COVID-19 in the past day, sharply down from over 1,000 single-day case repeatedly registered in the first half of April.

“Exercise caution on roads near Armenia’s border with Azerbaijan,” read one of the travel advisories. “Be aware that some portions of the road may cross international boundaries without notice. Roads may be controlled by checkpoints or closed to travelers without notice.”
The State Department issued the same warning to U.S. citizens who are currently in Azerbaijan. It also cited a “longstanding risk presented by terrorist groups, who continue plotting possible attacks in Azerbaijan.”

Both statements warned Americans against travelling to Nagorno-Karabakh and surrounding territories “due to recent hostilities.” “Casualties continue to occur following intensive fighting in the Nagorno-Karabakh conflict that occurred in the fall 2020,” they explained.

Armenia and Azerbaijan have been locked in a border standoff over the past week, with Yerevan accusing Azerbaijani forces of advancing several kilometers into Armenian territory.

The Armenian military warned on Tuesday that it could use force to drive them out if the dispute is not resolved peacefully soon.

The State Department earlier urged Baku to immediately “pull back all forces.”