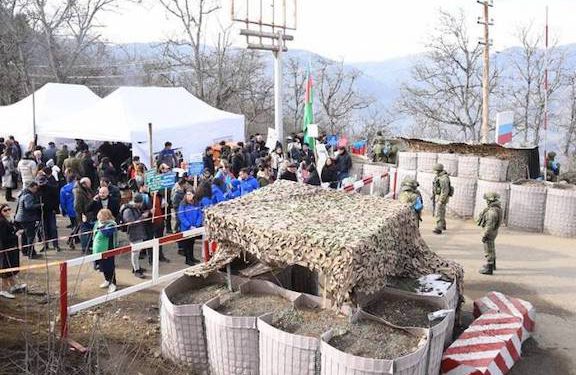 The Artsakh blockade has entered its seventh week.

Armenia’s Foreign Ministry on Tuesday called on Russia to use all its resources to end Azerbaijan’s blockade of Artsakh “without preconditions,” and called on the deployment of an international fact-finding mission to the Lachin Corridor.

The announcement also emphasizes to Armenia’s international partners that Azerbaijan has kept Artsakh under a blockade for more than three weeks by closing the Lachin Corridor, in direct violation of the November 9, 2020 agreement.

“Azerbaijan is obligated to immediately reopen the Lachin Corridor based on the principles of point 6 of the trilateral declaration of November 9, 2020, according to which Azerbaijan guarantees the safety of the movement of citizens, vehicles and cargo through the Lachin Corridor, and the Lachin Corridor is under the control of the Russian peacekeeping force in Nagorno-Karabakh,” said the foreign ministry announcement.

“Since the provisions of the trilateral declaration have been violated as a result of Azerbaijan’s illegal actions, we also expect Russia to make clear efforts to eliminate this gross violation without any preconditions,” the statement added.

“The humanitarian crisis in Nagorno-Karabakh is getting worse every day. The shortage of essential goods, food and medicine is becoming more and more acute. The risk of malnutrition is palpable. Hundreds of families remain separated, being on different sides of the Azerbaijani blockade. 120,000 people are de facto captives,” the statement said.

“Azerbaijan’s claims that the Lachin Corridor is actually open are completely groundless. This is evidenced at least by the fact that only International Committee of the Red Cross vehicles are allowed to transport a limited number of patients to the Republic of Armenia in the event of a life-threatening illness,” explained the statement.

The foreign ministry also emphasized the December 20 United Nation Security Council’s emergency session, which addressed the Artsakh blockade, but has yet to make a succinct statement on the matter.

“Armenia will continue to take targeted steps through all possible formats, including within the framework of the UN Security Council and international and regional structures, in order to ensure a decisive response and action arising from the mandate and functions of these structures, aimed at the elimination of the blockade of the Lachin Corridor and the resulting humanitarian crisis facing the 120 thousand people of Nagorno Karabakh,” the statement said.